Plant a tree in memory of Sandra
An environmentally-friendly option 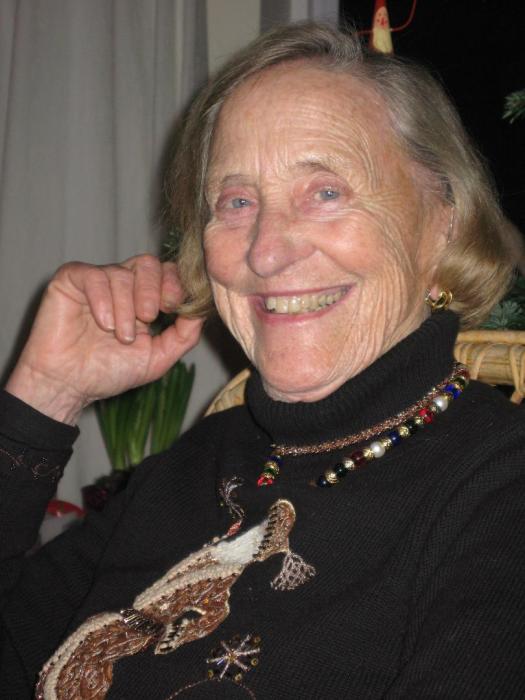 On March 11, Sandra Cooper Uhlein passed away peacefully after a brief illness.  She enjoyed 91 years, with a wonderfully full and meaningful life.  Sandy will be remembered for being a devoted wife, the best loved mother and friend, and her radiating smile.  When her husband of 68 years, Wyatt Uhlein, passed away two years ago, Sandy moved to an assisted living facility in Darien, Ct, near her daughter Anne Lantz and her husband Andy Greenfield, and son John Uhlein and his wife Cathy.  Her daughter Grace Bergius and her husband Bill live in Scotland. Sandy had hoped to visit them in Scotland one last time, a trip she made annually over 45 years. Sandy is survived by her sister Ginny Rhett, her three children, nine grandchildren and twelve great grandchildren.

Sandy, nee Sandra Jean Cooper, was born in Watertown, NY, a place she always called ‘my roots.’ She was the daughter of Dr. Howard Cooper and Mrs. Katherine Cooper. Sandy was educated at Dana Hall and Hobart and William Smith.  She met her future husband, J. Wyatt Uhlein, attending elementary school in Watertown and during summers both sailing from the Crescent Yacht Club, Chaumont, where both families spent summers.  They were married in 1950 when Sandy was 21, and proceeded to have three children Grace, Anne, and John. In 1957 they moved from Watertown to New Canaan, CT.   Sandy was a full-time mother and wife, and a caring best friend until the day she passed.

The Uhleins lived in New Canaan from 1957 until 1987, and then moved to Litchfield, CT. Their close friends remained a significant part of their life. Sandy was an impressive angler, played tennis, and was a graceful skier, but birding and gardening were her real passions. She was also very motivated by conservation, enjoying animals, birds and nature. Sandy loved the outdoors, especially Grenadier Island, on Lake Ontario, where she and Wyatt vacationed for 68 years, identifying wild flowers, bird watching, star gazing, sunsets and with family and close friends all around her.   As recently as October 2020, she traveled with her family to Grenadier Island one last time. And while the water crossing was a little rough, she was inspired to pick apples, ride her ATV, and bird-watch.

Due to Covid restrictions, her family is planning a memorial gathering for a future time to be announced.

To send condolences to her family, or for service updates. Please visit www.magnerfuneralhome.com

In lieu of flowers, memorial donations may be made to the Nature Conservancy (nature.org) or National Wildlife Federation (NFW.org)

Plant a tree in memory of Sandra by clicking here.
To send flowers to Sandra's family, please visit our floral store.

Plant a tree in memory of Sandra
An environmentally-friendly option

Plant a tree in memory of Sandra

1 tree planted in memory of Sandra

Such a wonderful women! She lights up any room. Rest In Peace Sandy. You left everyone with such beautiful memories ❤️

A Memorial Tree was planted for Sandra Cooper Uhlein

We are deeply sorry for your loss ~ the staff at Magner Funeral Home, Inc.
Join in honoring their life - plant a memorial tree

Plant a tree in memory of Sandra